Last weeks #SundaySwing ideas blog post here worked really great for me, because I came back multiple times to my own writing to see what my thought was on one of the swing plays I had selected. So I will continue to do the same this week and I hope this helps you too.

Disclaimer: No advice, instead these are my ideas based on my knowledge analysing the charts for possible swing trades based on #TheStrat. So please always do your own due dilligence before entering a trade.

After that powerful week with SPY continuing to keep going up and only was stopped on this run on Friday I’ve mixed feelings going into the next week. I haven’t analysed a single play at the time of this writing, but since I’m normally a perma-bull, my swing trades will be long plays and very rarely there will be a put play.

All ideas are based as a swing idea, so I plan to buy options with at least 2-3 weeks expiration. On some I would go to 11/19 or even December expiration to buy some extra time and go away from earning because many have earnings in the next couple of weeks.

Would love to get some feedback about this new “format” and if this helps educate #TheStrat, as well as I’m open for any things that will help more.

Note: To view the charts in full detail, open them in a new browser window 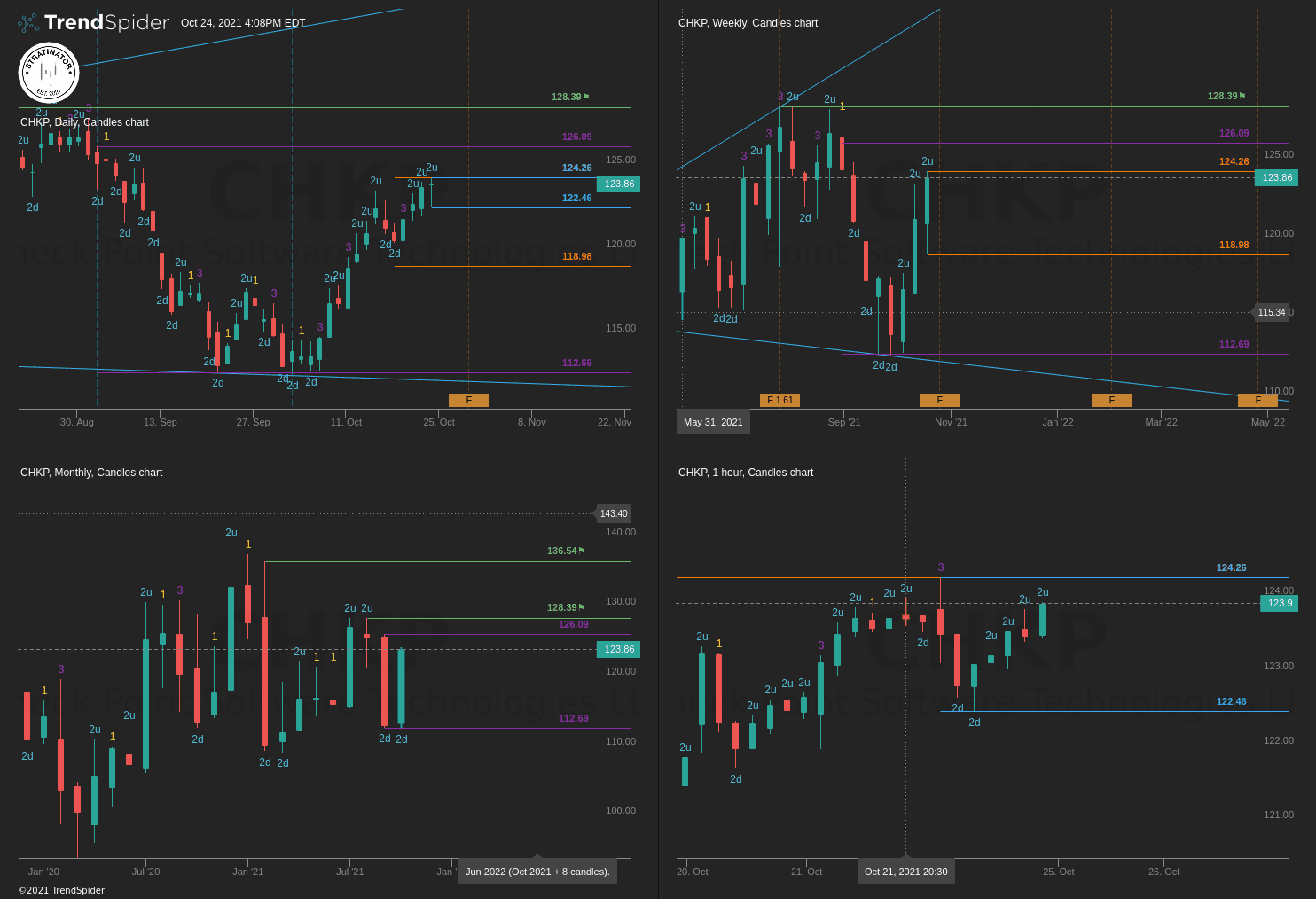 Closed the week inside and green, month red, so not a good start for a long play. However it is a possible 2-1-2u on the weekly and eyeing than on a 2d-2u bullish reversal next month with a possible PMG-like setup. So my play would be the 12/17 72.5c or 75c which are pretty “cheap” at around .75 and 1.23 with nearly 6 weeks expiration.
If, however $MU drills down even more, a shorter swing play with a 64p at break of 66.29 for a 2-1-2 bearish continuation into FTFC down would be my entry. 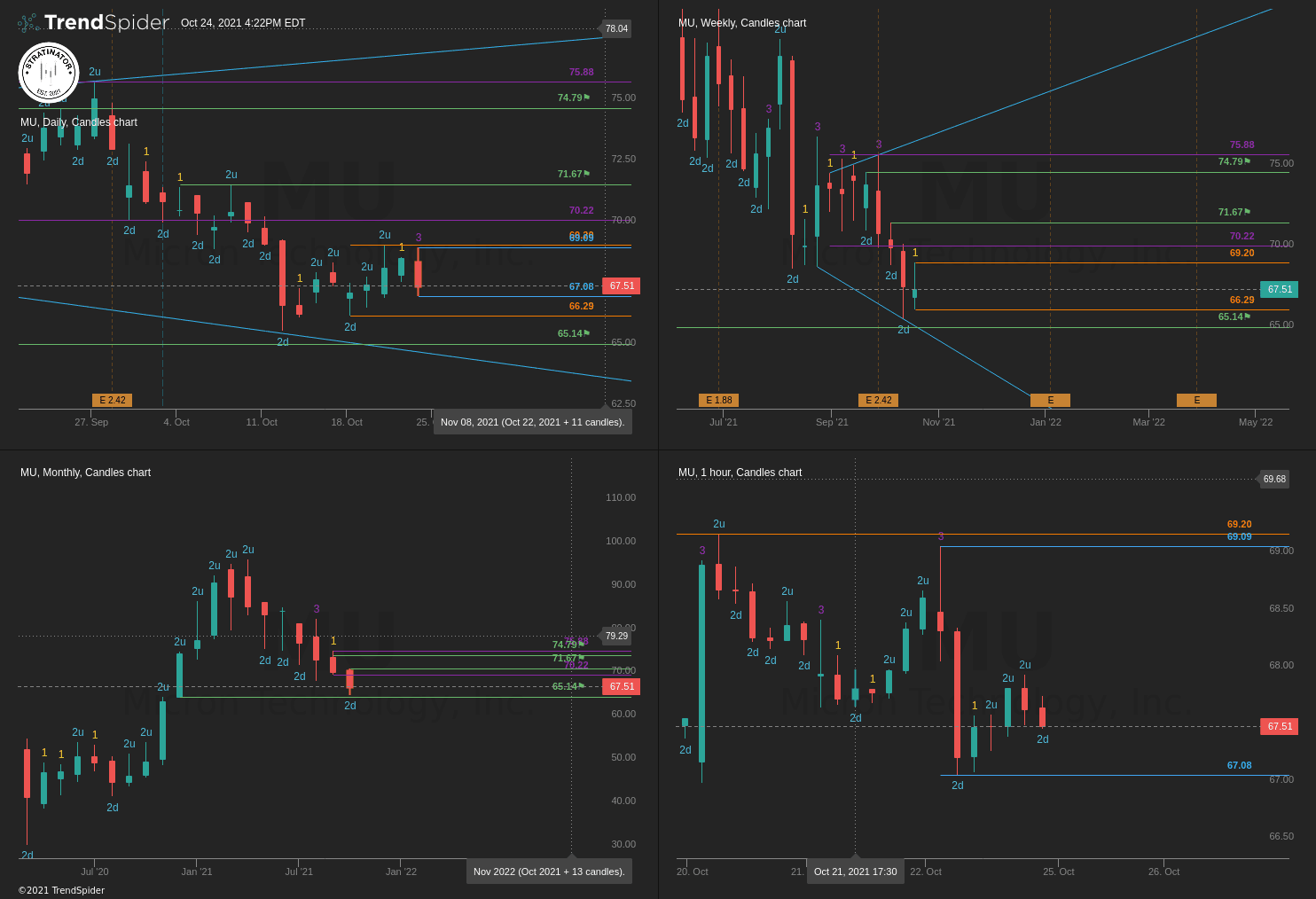 Outside week after an inside one, so powerful setup into FTFC up and a good chance for a 2u next month. PTON has earning on 11/4 so I would go with the 11/19 or even later. Eyeing for a possible 3-2u next week, so it depends on the opening, because I don’t like to hold through earnings and I may even close this after only a couple of days to avoid earning lotto. 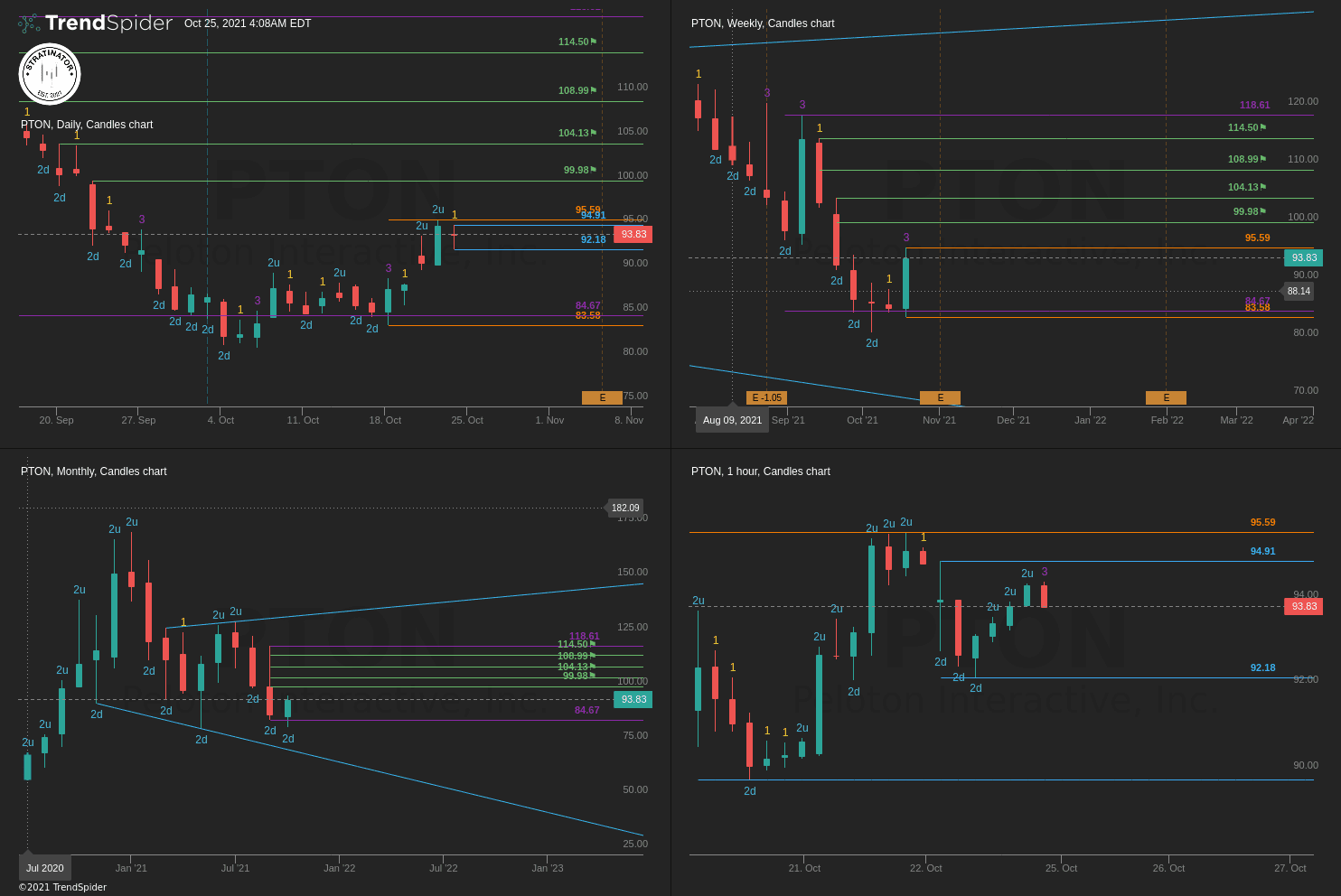 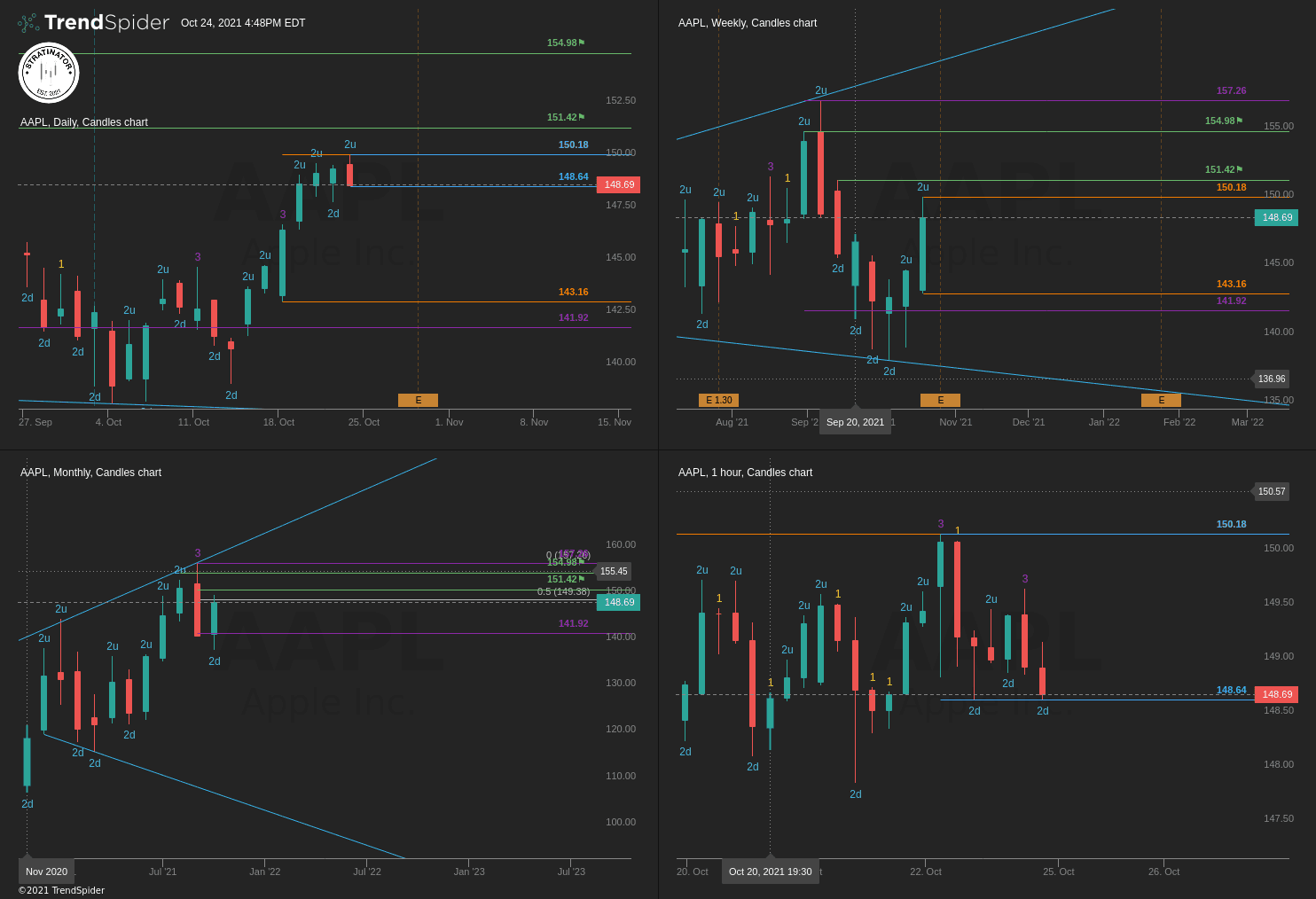 Eyeing both sides for a possible 3-1-2 weekly direction not sure yet. Trigger for the 73c is 72.55 which seems far away currently for a slow mover like $C but who knows. So therefore 11/19 expiration at minimum. To the downside a possible 67p also with 11/10 expiration to turn the month red into FTFC down is a valid target of 65.97. 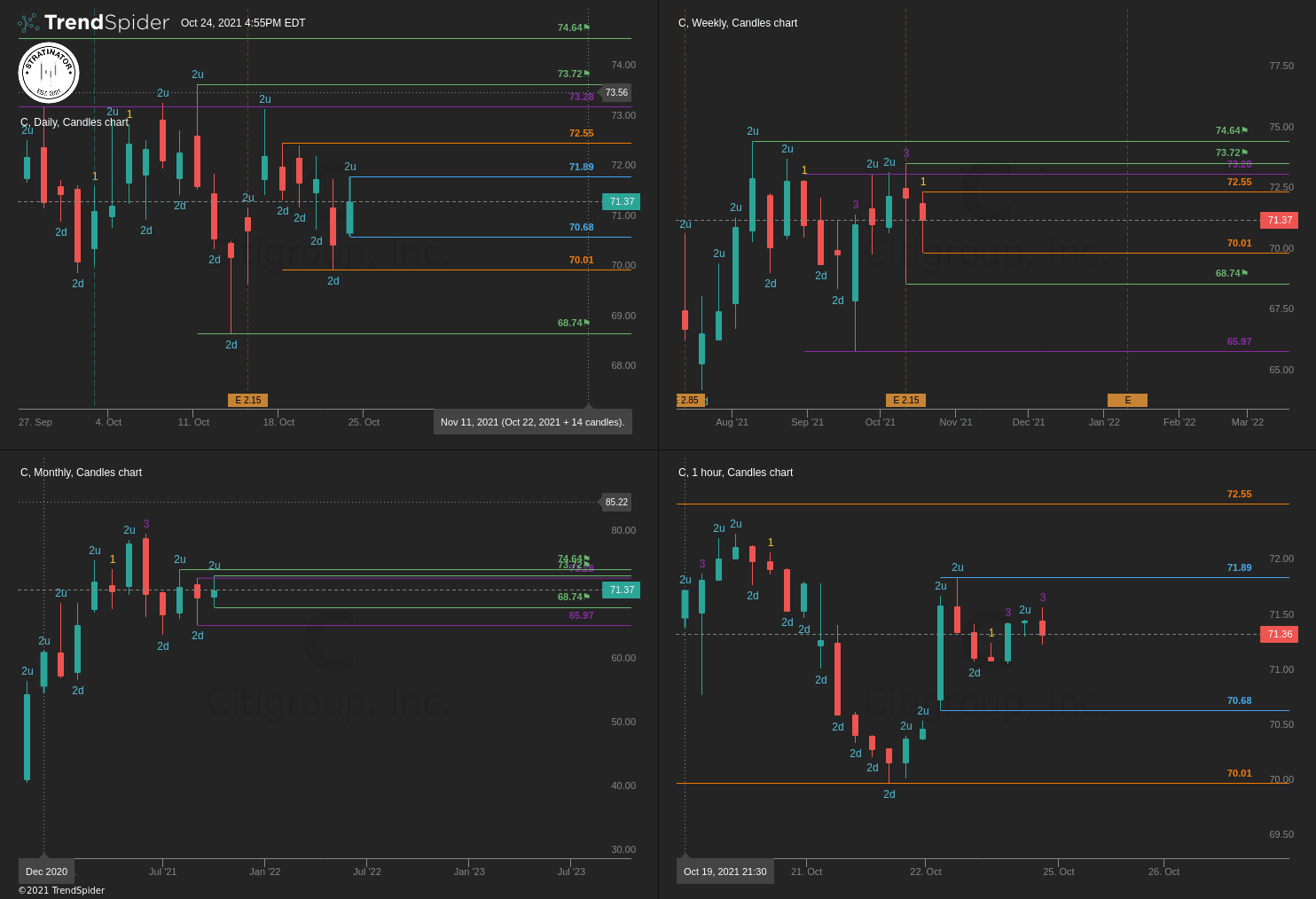 A little on the expensive site with a great opportunity. FDX looks like a reversal here, even if the month is 2d, it’s green, so eyeing on a 2-2 Bullish Continuation on the weekly above 234.70. Since there is no near real target and FDX has a gap to fill to the 250 area, a 240c or 245c with 11/19 expiration would be my play here if it triggers the week up for a possible 2-2 bullish reversal on the next month. But this is speculation, as before and only watching next week for a trigger. 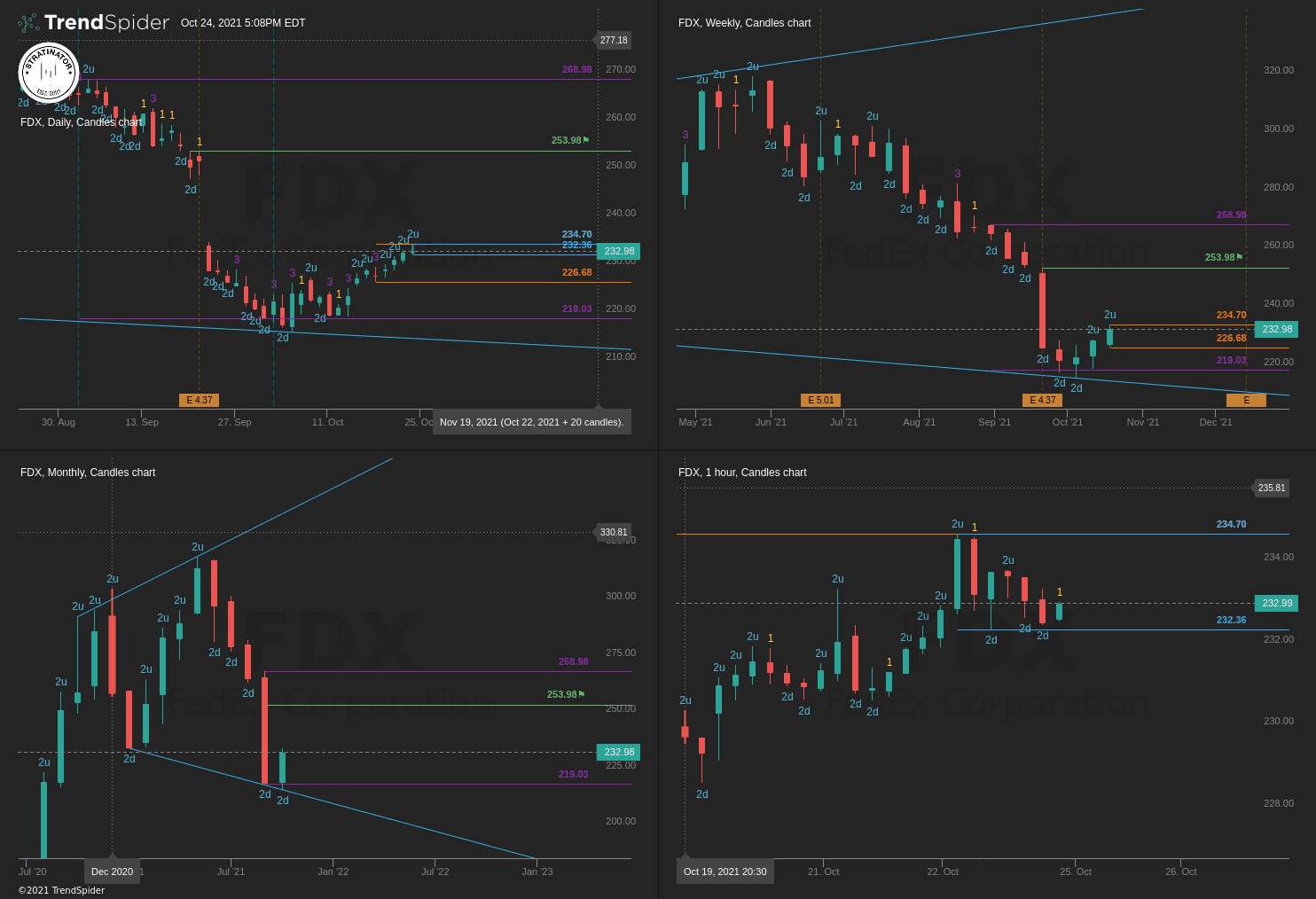