Disclaimer: No advice, instead these are my ideas based on my knowledge analysing the charts for possible swing trades based on #TheStrat. So please always do your own due dilligence before entering a trade.

New month, new week and new day, not sure how they start into the new week. After that bullish run in the second half October I’m unsure, because looking at $SPY and $QQQ the monthly view looks bearish currently. This may change and sincce #TheStrat is price action, a bullish continuation is also playable, but a bit difficult because of all the ATHs.
The Broadening Formation on SPY and QQQ looks, for weekly and daily looks like a correction is imminent:

Let’s see how they open the new month and if it breaks the top of the broadening formation.

After some backtesting and analyzing my last few #SundaySwing ideas, results showing a success rate of around 75% for the plays when they triggered, but only for contracts that had at least 3-4 weeks of expiration. I don’t take the ones into that calculation, that never triggered, because that’s why I play them #TheStrat-style. So keep that in mind when buying options for swings.
All ideas are based as a swing idea, so I plan to buy options with at least 2-3 weeks expiration. On some I would go to 12/17 expiration to buy some extra time or avoide expiration near earnings. As noted above, 3-4 weeks out more seems successfull (no guarantee!) then weekly options but it all depends on your risk and trading style.

I usually target around 25-40% of profits on thos swings and decide during the market hours if I leave a runner on a position or close the entire one.

Would love to get some feedback about this new “format” and if this helps educate #TheStrat, as well as I’m open for any things that will help more. To view the charts in full detail, open them in a new browser window

Closed the month 2d and green, candle coule be interpreted as a hammer, so I’m bullish on $KSS. Earnings on 11/16 so this one will be a 12/12 expiration if it triggers the month 2-2u Bullish Reversal. Possible targets are the 56.82 on the weekly which is a huge one and needs to be take out to run further up to 58.17 and maybe 60.50. The 55c would be better but is not as liquid as the 60c and also has a wider spread. So it maybe won’t go ITM in November. On the daily chart, there is also a gap above the 49.93 up to 53.58 which is a possible short-term target. 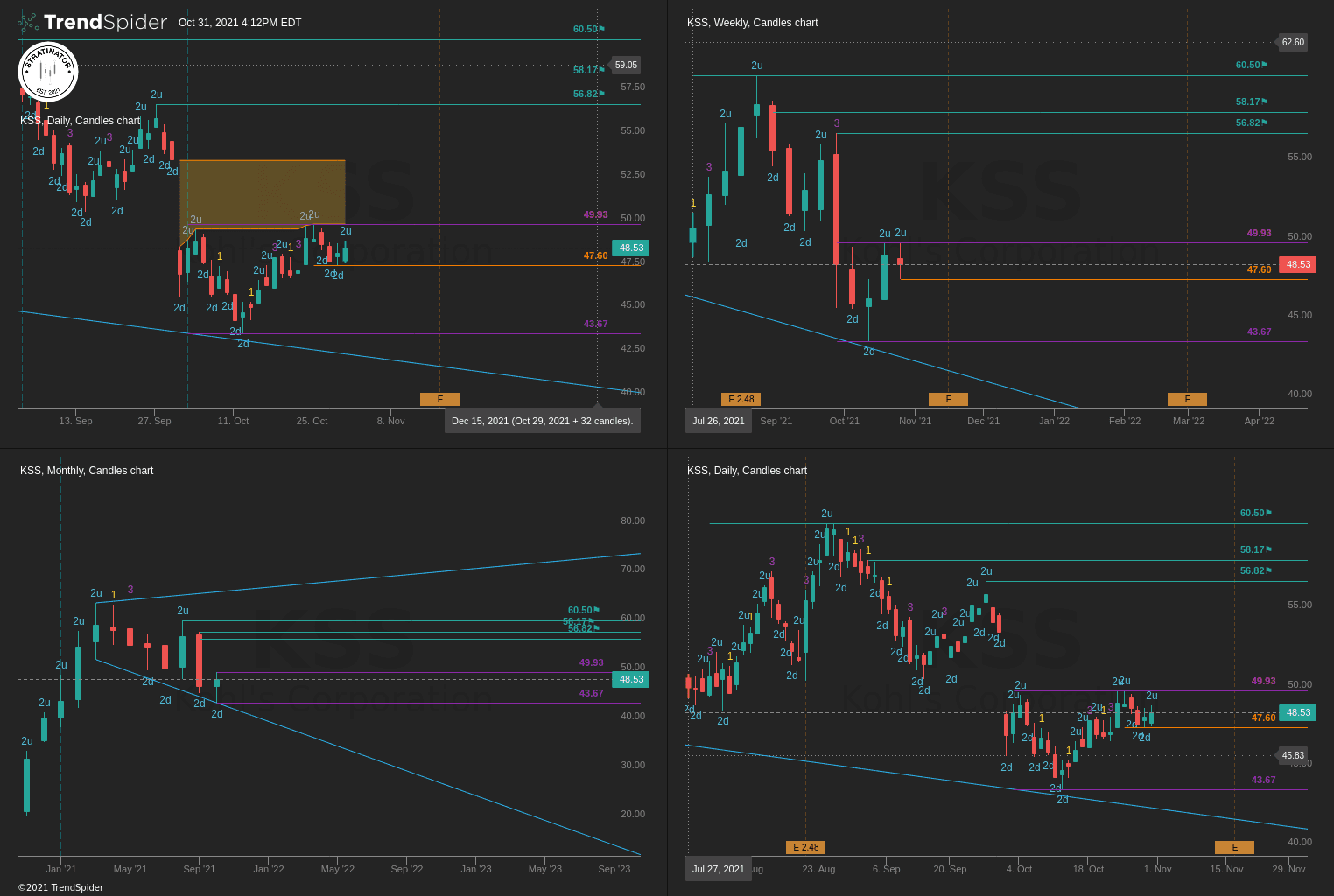 A bit more expensive premiums and maybe the 200c and 140p look to wide of a spread, but since ABNB had an inside month with a Doji candle both sides are possible and therefore if one side breaks the next targets are in that region. Keep in mind that ABNB has earnings on 11/5 so a 11/26 expiration would by my play if it triggers on one side before. Could be totally different after the earnings. 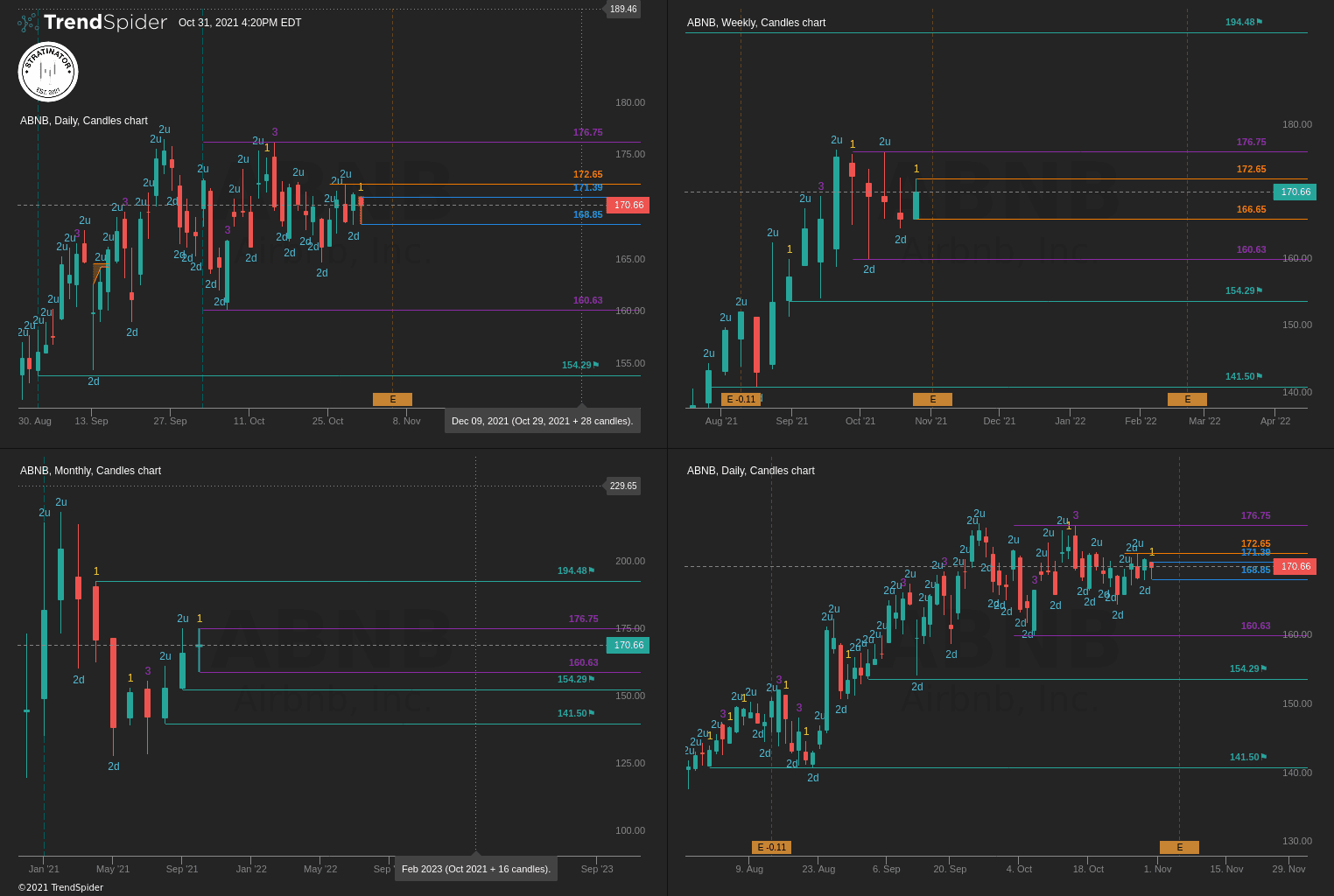 Has earnings on 11/2 so maybe a trigger right after the earnings that I watch for a possible 2-1-2u Bullish Reverval monthly, but like ABNB, it closed the last month inside with a Doji, so both sides are on my watchlist. I eye on a 12/17 expiration for that to buy some time after earnings.
Targets bullish are 86.39 and 95.40 which should be possible with 6 weeks of expiration. On the Bear side, 72.20 and 71.19 are possible. 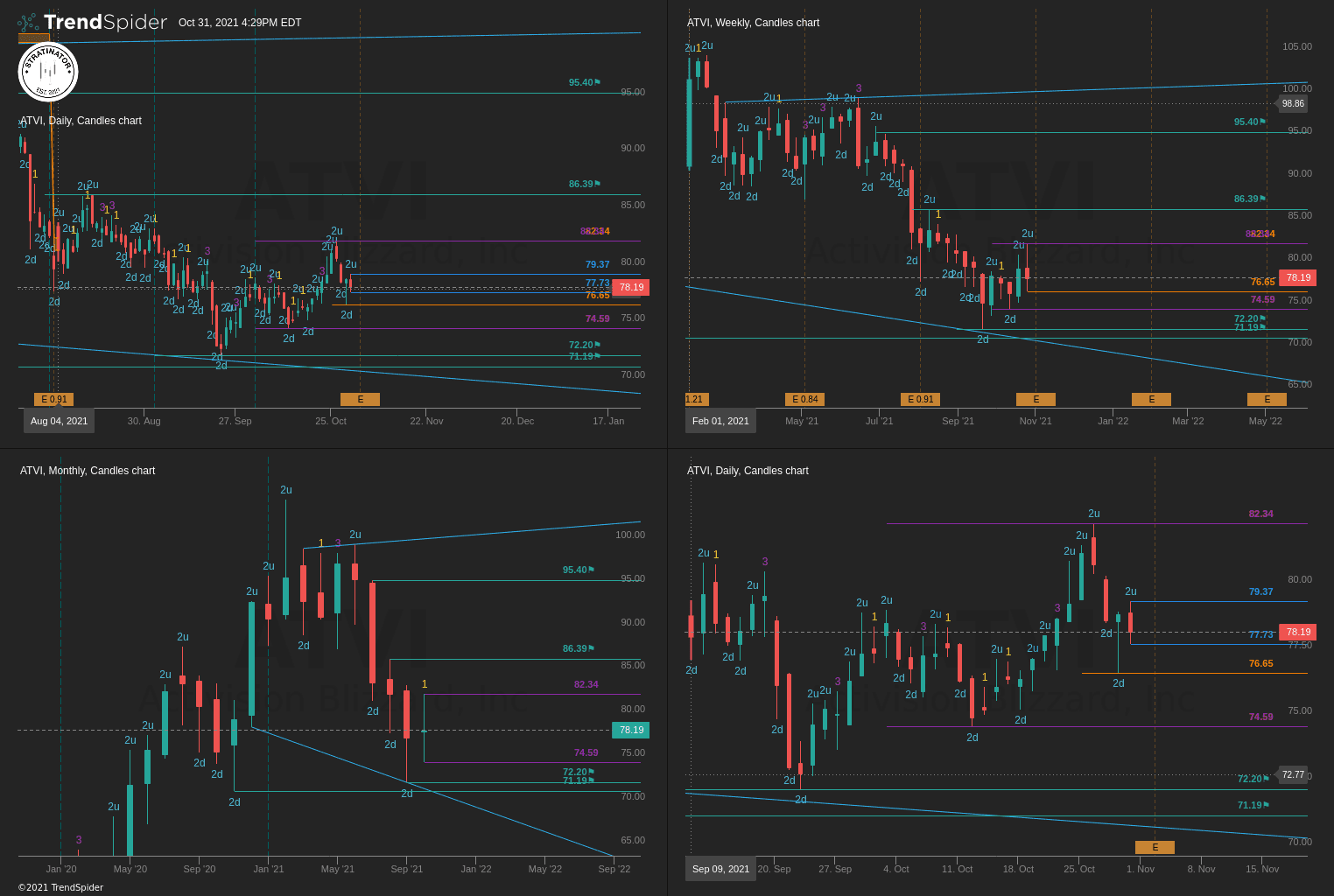 Recovered after the dip from earnings last week and looks strong, because it’s AAPL! A possible 3-2-2u Bullish Reversal on the monthly, contracts for 12/17 170c are looking good and had some flows (more on that flow thing later when I’ve learned some more about it) last week and isn’t that expensive. However above 157.26 is blue sky and no other targets. So it may not go ITM by 12/17 with the 170c but I’m always bullish on AAPL, so slightly biased. 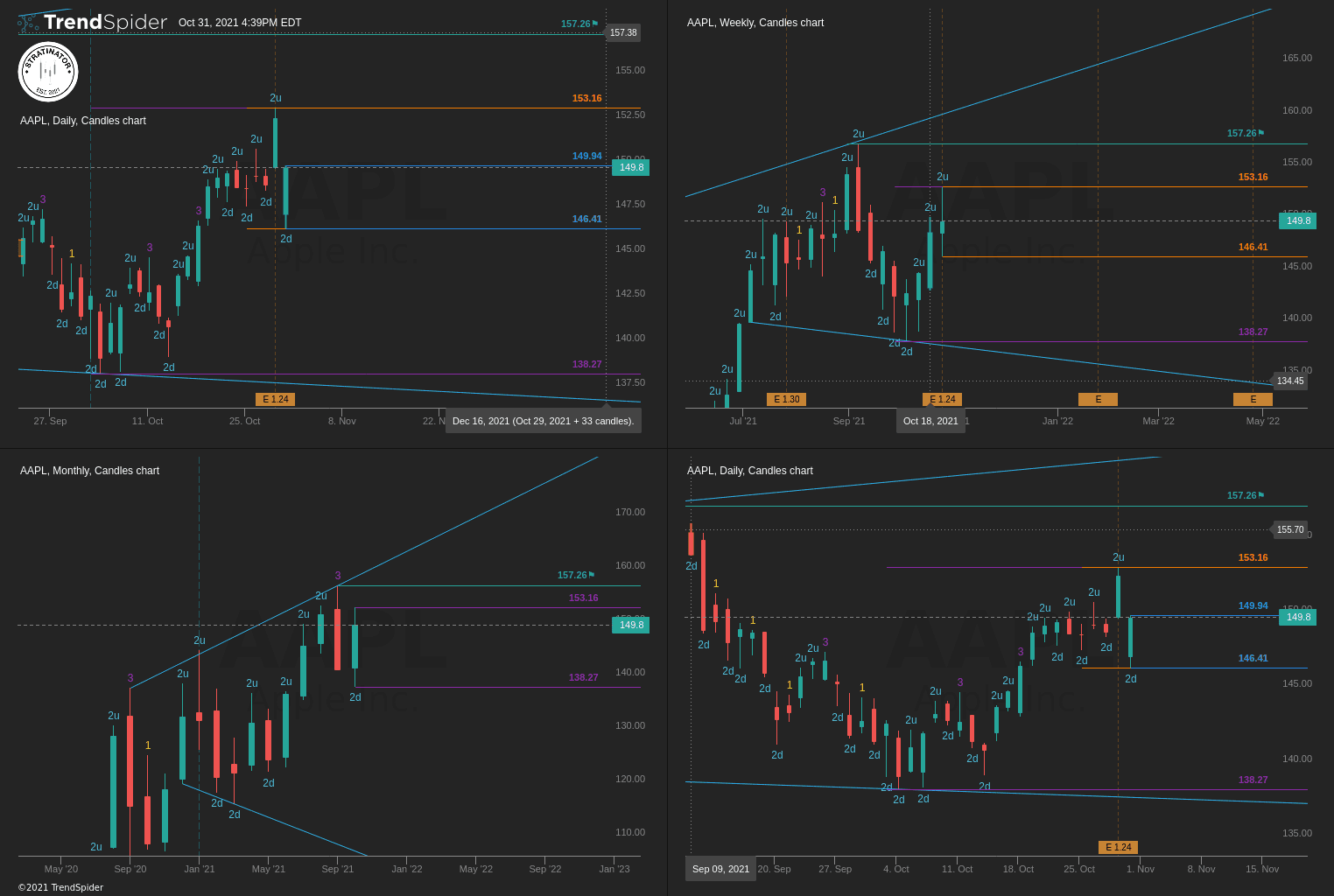 Had also earnings last week and recovered pretty quick after a negative EPS. Eyeing for a possible 3-2u Bullish Continuation above 90.39 back to previous tartgets at 95.38, 96.71, 99.48 and 101.40. So with those levels the 12/17 expiration has my attention if the monthly triggers a 2up. Have to watch liquidity on those contracts because spread of all of them isn’t that good and a LMT order is the way to limit a high entry for the premiums to pay. 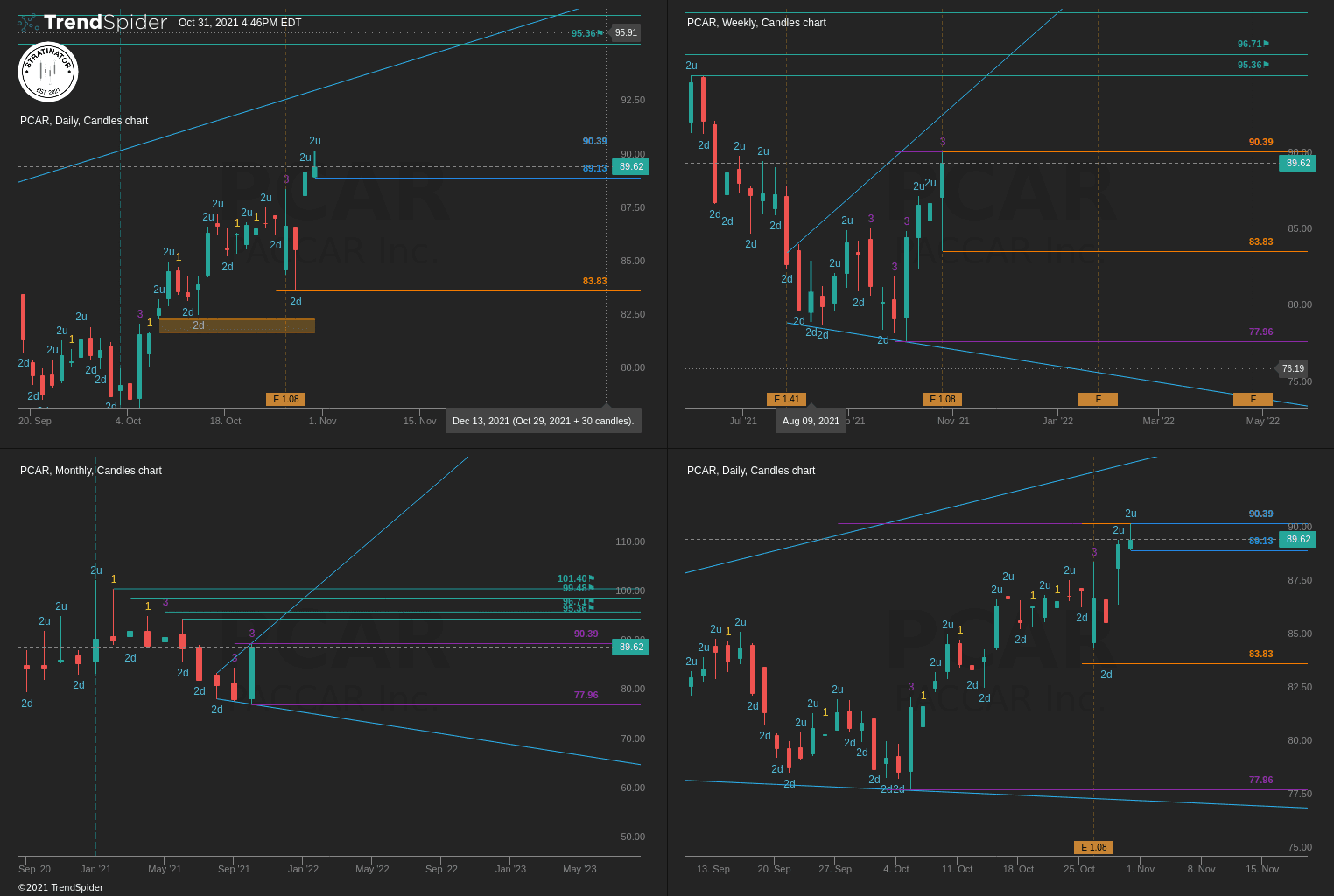